Every Man's Dream: A Pub at the Bottom of the Garden

Every Man's Dream: A Pub at the Bottom of the Garden
Home / About Us
View More Case Studies

Every Man's Dream: A Pub at the Bottom of the Garden 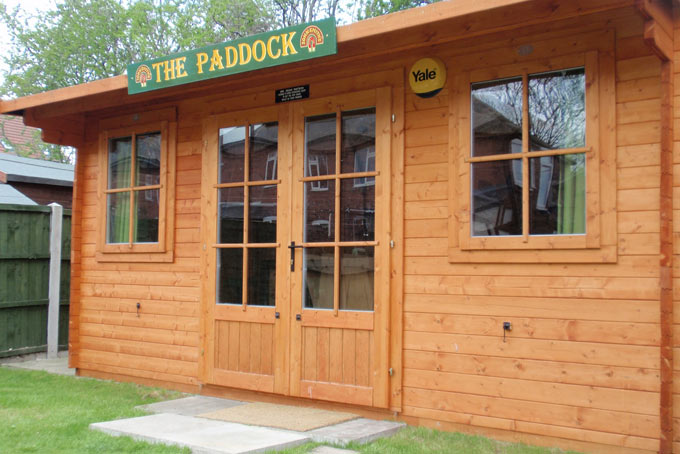 Sports lover, Dean Watson, turned our Severn 5m x 4m cabin into a cosy, quintessentially British pub known as 'The Paddock.' Complete with a fully stocked bar, its own sign and satellite TV, the cabin is the perfect space for Dean to indulge his passion for horse racing.

The need for a sports pub 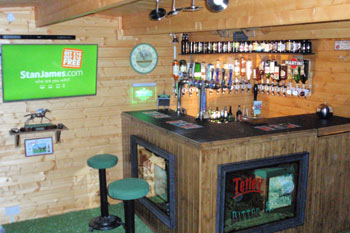 The lack of a pub showing sport, within walking distance, was the major motivator behind Dean's purchase.

"I'm from Castleford in West Yorkshire, and as such am a huge Rugby League fan –obviously supporting my local team, the Castleford Tigers," said Dean.

"Although I don't play sport, I would say my interests revolve around sport, ranging from the popular sports of boxing, darts, rugby, and football, to not so popular sports such as greyhound racing. I also have a huge interest in horse racing, which is the inspiration for my log cabin."

"I'd always wanted my own pub and after moving house the previous year, I finally had some garden space to realise my dream. The fact that we didn't have a local pub with satellite television, within walking distance of the house, only strengthened my argument with the girlfriend to realise my dream – not that she took any persuading."

It was the competitive pricing of our garden buildings that really caught Dean's eye, as he had a limited budget of £4,000 for the build, including roofing and initial weatherproofing.

"In the current economic climate, I thought it wise to get the best you can within your set budgets and after visiting various different sites and companies, I decided on Dunster House," said Dean.

However, the great service offered by our staff and the high quality of our garden buildings were also important factors in his decision.

"I chose Dunster House over rival brands based on their overall quality, strength, appearance and value. I wanted a cabin that would be there for the rest of my life, if I treated it well, that looked the part and that was within my price range."

"Needless to say that Dunster House was head and shoulders above the competition in terms of both quality and price. The customer service was exceptional throughout too." 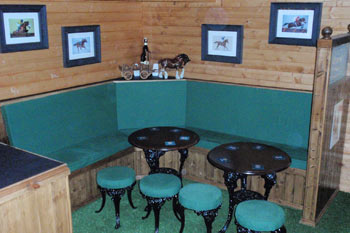 The building process took around 24 man hours to complete, with the finishing touches, such as waterproofing the roof, taking only four man hours.

"I'll be honest, I was doing my day job when the assembly took place, so will not be taking credit for any part of the build," said Dean.

"The build went very well and didn't cause too much stress, despite my dad being a naturally stressed person."

The transformation of the cabin into Dean's dream was a leisurely one.

"I had always planned on making my cabin into a pub, and had a rough idea of what I hoped it would look like without any set plans," said Dean.

"Due to not having any set plans, the finished article kind of adapted as the project went along, after taking on board various suggestions/ideas from friends and family along the way."

"The modification to the project didn't get on the way until August 2013, due to both funding issues and time restraints. Now that the actual shell was built, I wasn't as much in a rush to complete the internal work – it was more of a weekend hobby."

Finally, in November 2013, The Paddock opened its doors. The finished product was everything that Dean had wished for and more – with unpainted timber walls, traditional bar stools and racing paraphernalia on display, it's hard to believe that you aren’t in a traditional English drinking pub. 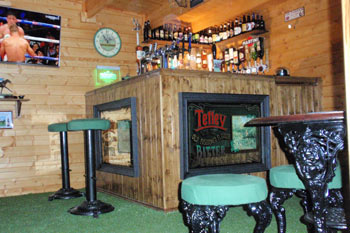 Unsurprisingly, The Paddock has been a raving success with friends and family.

"Everyone that has visited so far has been amazed by it to be honest. Most actually prefer it to traditional pubs! I'm presuming that this may be due to it being set out like a traditional pub and offering everything your standard pub offers, without the excess queues and inflated price!"

"The main comments I receive about the cabin is how well it retains its heat and how strong/sturdy the structure is without any moisture or dampness. Most people actually liken it to an actual house, stating they could sleep in here."

Of his favourite aspect of the project Dean said, "Being able to walk 20 metres to my local pub is a dream come true – whether it to be for a general drink, for a game of darts, to watch some sport, or to simply have some me time out of the house."

When asked if he would buy from Dunster House again, Dean replied: "Without a doubt! The cabin that I have is sturdy, secure, dry and definitely value for money. The overall transaction and liaising with Dunster House throughout went perfectly, so I wouldn't hesitate in using (them) again."