A Little Piece of Britain in France

A Little Piece of Britain in France

We're continuing our look at the amazing spaces that our clients have created from our garden buildings, with Roland and Alison Philips. The couple, who run a charitable association, transformed our Sienna 4m x 5m into a quaint gift shop for visitors. 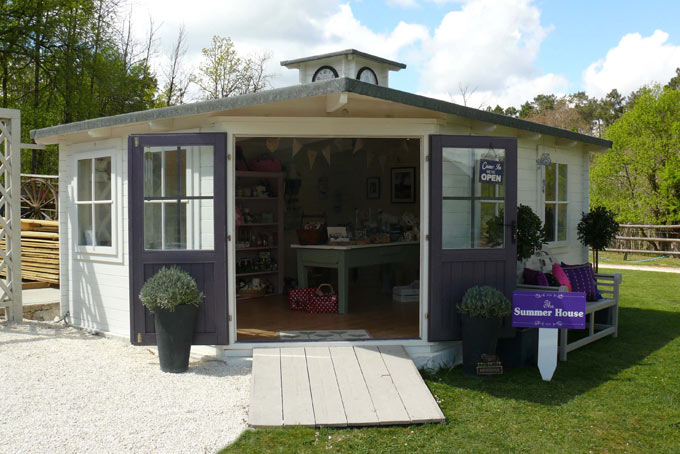 The traditional summerhouse has helped to bring a little bit of Britain to the beautiful countryside of Dordogne, and has gone down a storm with friends and customers alike.

Roland and Alison's motivation for purchasing a garden building was the need for a gift shop, which would fit in with the quaint British style of their house and garden.

"Our home is so typically English that it was featured in an ITV television programme in 2012 which was viewed by nearly four million viewers," said Roland.

"We have a charitable association which raises funds to look after the (retired police) horses. This is called Brantome Police Horses and we have 21 retired equines."

"During the summer, we have an open day twice a week for visitors to meet the police horses and, following the tour of the stables; we serve traditional Devon cream teas on the lawn. We needed a small and attractive building which would sit easily in our British style of garden, to be used as a gift shop."

Roland and Alison were won over by our charming Sienna 4m x 5m summerhouse, after visiting the Dunster House show area in Warminster. 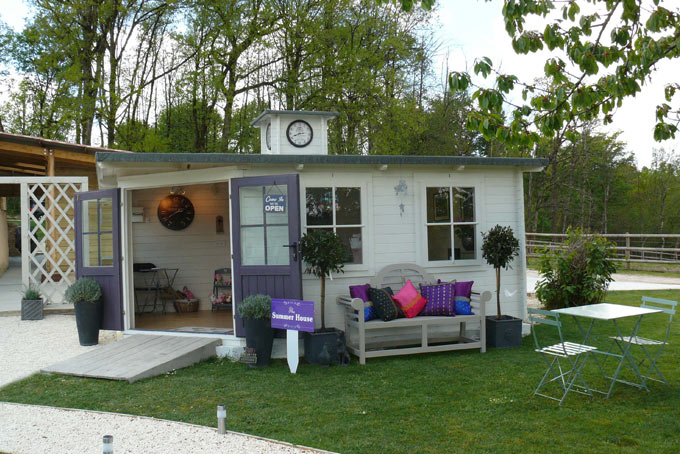 "After a great deal of research we purchased our Dunster House log cabin in February of this year," said Roland.

"We had a particular design in mind, but we are so pleased that we went to the see the show houses on display at the Dunster House show area in Warminster."

As well as requiring an attractive and robust design, Roland and Alison's location in France meant that it was important that the building was delivered complete and ready to go up.

"The building had to meet a number of criteria; it had to look like a traditional British summer house, it had to be well made and robust enough to take the footfall of many visitors and it had to come from a company that could deliver a product that came complete and without problems, because of the distance that it had to travel. "

"If something was missing during construction, we couldn’t just pop down the road to get the missing part, we would have to wait a week or more for it to come out to France."

"Dunster House by far stood out amongst the many other companies that we looked at. What greatly impressed us was the quality of the buildings especially in relation to the price that we paid." 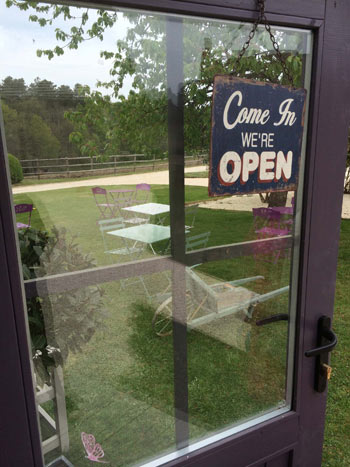 For Roland and Alison, creating their perfect gift shop was a remarkably stress free experience, with the entire build taking place in just a week.

"We really enjoyed the process of putting up our summer house," said Roland.

"I am pleased to say that everything was there and because of the clever way it had been packed nothing was damaged. It was up in a week and I couldn’t believe how easy and stress free the process had been."

"I put it up with my son in law and a friend who is a carpenter, but his skills weren’t needed. Even he was amazed by it and said he couldn’t have made one for double the price."

However, the speed of the process was also greatly aided by the excellent customer service offered by the Dunster House team.

We found the sales staff to be very friendly and efficient without being pushy. During the build we mislaid one of the plans, which we later found. However a quick e-mail to the after sales team and a copy was e-mailed back almost immediately." 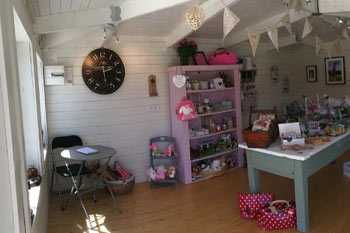 The summer house has been a hugely popular addition to the couple's charitable association.

"The house has been seen by dozens of people already and has been a great success. Our first event for the season was a classic car lunch at our home which is called La Grange."

"Everyone thought that the summer house was beautiful and we had many lovely comments, in particular how well made and attractive it was. Even our French neighbours have been won over by the build quality."

"We have made many recommendations now, so hopefully you may see more clients buying in France!"

What does the future hold?

In the future, Roland and Alison are already planning to work with Dunster House again on another project. They also hope to get the most out of their versatile building, by transforming into a cosy snug during the winter months.

"At the end of the summer we will take the gifts out of our summer house and, because it is beautifully insulated, use it as a quiet place to read and relax – so perhaps we will then rename it as our winter house!"