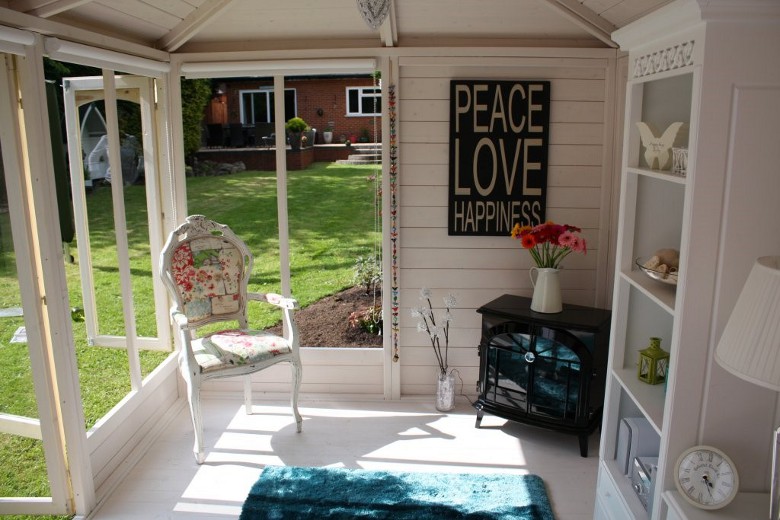 David Quinn, the runner up in our 2014 Great British Garden Retreat Competition, transformed our Valiant 470 Summerhouse into a bright and airy escape from the modern world. Here's how he created his perfect space.

Giving an unloved part of the garden a purpose

It was a friend's summerhouse which first planted the seed in David's mind, to purchase his own from Dunster House. "Some friends had a summerhouse they had built themselves, as part of their garden and they used it all the time," David explained, "It inspired us to get one".

However, another motivation for the renovation was to give a neglected corner of the garden a new lease of life. "We had a small unused hard standing from an old greenhouse and… it seemed an ideal use for an unloved part of the garden."

"We liked the size and design of the Dunster House Valiant range, and it was good value for money", said David about his decision to choose the Valiant 470 Summerhouse. But for David, the friendly and helpful customer service offered by our team was just as important to his overall experience of the process.

"The delivery driver was excellent.  He helped unload it to the back of the house and gave some tips on how to handle the different sections. Customer Service was also helpful when a pane of glass got broken, whilst it was still stacked up.  They gave me the correct sizes to order, so it was ready when we assembled it."

David and his wife Susan assembled the summerhouse together, with assembly, painting and furnishing all taking place in a matter of weeks. The initial build took three days, with two people for two days on assembly and then David working for one day on shingling the roof. 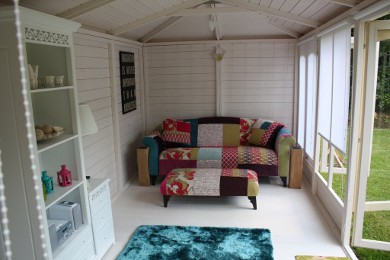 In total, the entire project took only three weeks, with the three coats of paint inside and out taking up the most time. David's confidence in his choices undoubtedly increased the speed of the process. "I had a design in mind, particularly for the interior. I even knew what sofa was going in it!" The finished product shows a real flair for design, with strong flashes of colour on a neutral background, giving the space real impact. 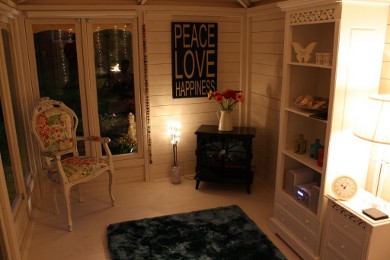 Getting back to nature

The three weeks of work have certainly been worth it, creating a retreat that David and Susan love. In particular, the summerhouse is a space which allows them to feel closer to nature and escape from everyday life.

"We like how it fits into the garden, far enough away from the house that you feel like you could be anywhere," said David, speaking about his favourite aspect of the finished project. They've even been lucky enough to see some garden wildlife that they might otherwise have missed, and which has helped form one of David's fondest memories of the retreat so far.

"We sat in the summerhouse at night and a family of hedgehogs appeared and spent ages wandering around outside while we watched". 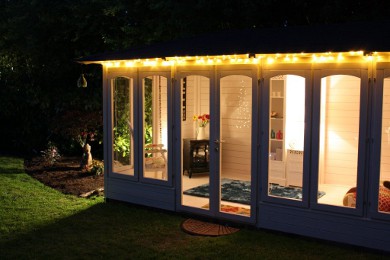 The stylish space, which transforms into a cosy hideaway when night falls, has been a resounding success. "Everyone that sees it loves it.  One friend said ‘This isn't a summerhouse, it's a second home!’"

In the future, David and Susan plan to continue improving their summerhouse, making the view from its French windows even more picturesque than it already is. "We plan to install a path from the house down to the summerhouse and there is more landscaping and planting to do around it."
When asked if they would buy from Dunster again, David replied: "Definitely. The product is good and it was great value!"