Case Study- A Home For a Pool Table

Case Study- A Home For a Pool Table
Home / About Us 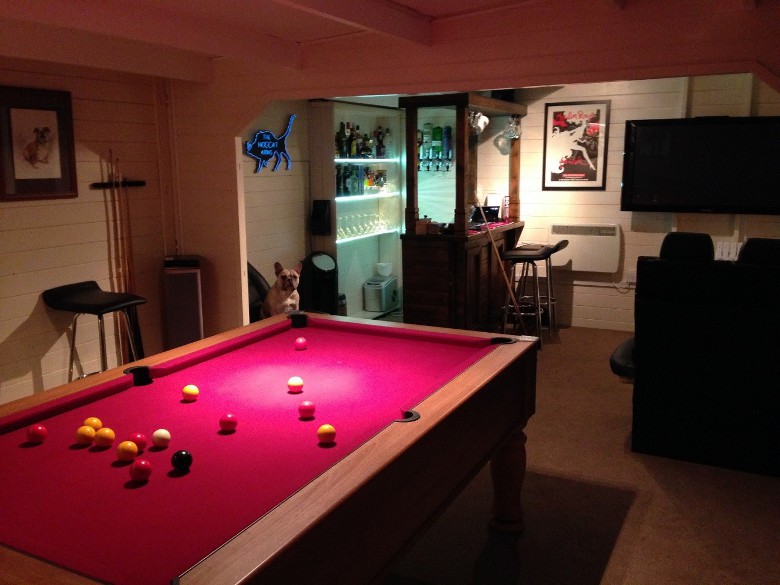 Matt Hogben, who came third in our 2014 Great British Garden Retreat Competition, is a lover of all things fun, Matt transformed our Lantera 450 Grande into a hangout for family and friends, complete with boy's toys including a pool table, TV, dart board and bar. Here's how he created this enviable space.

A home for a pool table
The idea to buy a log cabin first arose thanks to a disagreement about where to put a rather large 'bargain' purchase of Matt’s.

"The honest truth (behind) the cabin purchase was my 'bargain' £300 pool table from eBay! My partner Jane then exclaimed that we had nowhere to put it, as she likes to use the dining room for eating in – a ridiculous idea, personally!"

While refurbishing their home, Matt and Jane had cleared the garden of many skip's-worth of weeds, roots and stumps. What emerged was a conveniently log cabin sized shape – a perfect solution to the pool table problem.

Choosing a Dunster House garden building
"We came to view a cabin in summer last year at your Bedford site, as we were nearing the completion of our refurbished house and our thoughts turned to the garden," said Matt about the first steps to choosing the Lantera 450 Grande.

"We were pleasantly surprised at the quality, and after being reassured that we could put a deposit down and pay the rest later, when we had time to erect it ourselves, the deal was done."

The essential pool table and bar were an important consideration when it came to choosing the perfect log cabin. "The size of the pool table and the added requirement of the bar (naturally) meant we needed quite a big cabin and with plenty of natural light," said Matt. 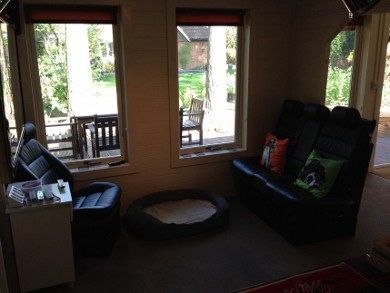 Achieving the dream
For Matt and Jane, achieving their dream of the perfect space happened remarkable quickly, with the entire project being completed in a matter of weeks.

"The assembly to being watertight took roughly 2 weeks, with a bit of help from the brother in law. Then it was roughly another slower paced week and a half, painting several coats outside and inside, getting electricians in, carpeting and finishing touches... plus another week to make the seats from a written-off Audi A6 from eBay!"

Matt's experience of dealing with the Dunster House team also made the process more enjoyable. "The sales team were fantastic, really helpful allowing us the time to ensure we could afford it – no pressure whatsoever."

A space for everyone to enjoy 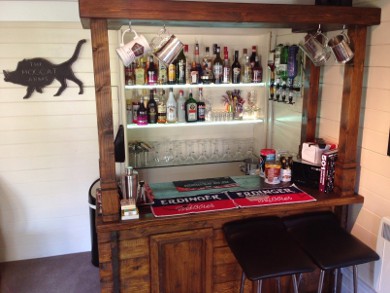 A lover of football, pool and relaxing in the garden, it was important to Matt that the log cabin was a fun space for everyone – from dogs Winnie and Pete, to family and friends.

"Everyone absolutely loves it – there is something for everyone."

Having never built anything more than IKEA furniture in the past, Matt was initially apprehensive about taking on such a big project. However, the log cabin has been a resounding success. "The satisfaction we get when we're in there is amazing, we are so proud of it and everyone who pops in is amazed with the whole project."
"My favourite aspect is the bar; it looks just like an 'Olde Worlde' pub that just makes you relaxed and really brings everyone together for a good party!"

What does the future hold?
Aside from a pump to use water at the end of the garden, Matt's future plans for the log cabin involve having even more fun. So, what are the most important things left to get? "An aerial for the TV to watch the World Cup and some more spirits for the shelf!"

When asked if he would buy from Dunster House again, Matt replied: "Hell yeah, in a heartbeat – though hopefully we won't move for a long time – why would we with that at the bottom of our garden!?" 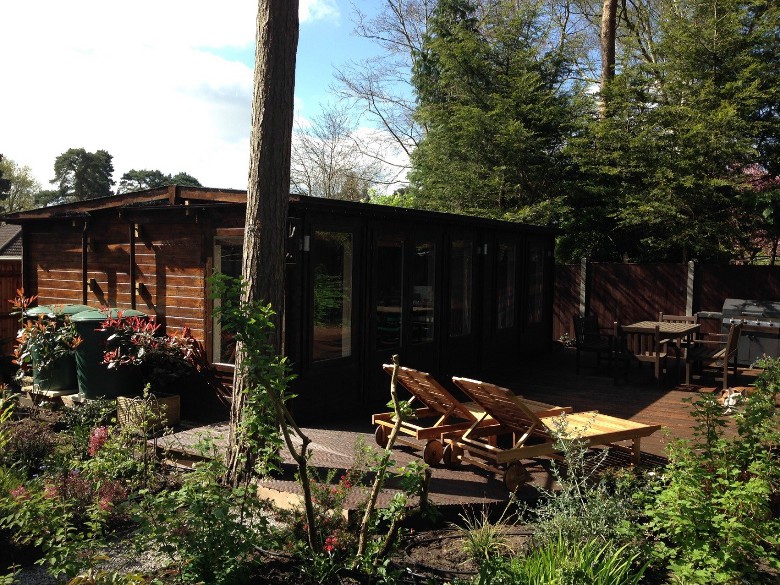